A recent audit campaign by the ATO has highlighted a critical need for SMSF trustees and advisers to plan carefully before travelling overseas for extended periods, or face potentially devastating tax penalties.

The ATO has recently issued notices of non-compliance to a number of SMSFs on the grounds that they ceased being ‘resident’ funds (known as ‘Australian’ funds from 1 July 2007). These have been issued even for unintentional breaches as the ATO has no discretion in applying the relevant laws.

Broadly, a fund must satisfy two tests in order to be an Australian superannuation fund in any given income year.

Firstly, the central management and control (‘CMC’) of the fund must ordinarily be in Australia. This test generally looks at where the strategic and important decisions of the trustees have been made (ie, in Australia or overseas).

The CMC will ‘ordinarily’ be in Australia even if the CMC is temporarily outside Australia for a period of not more than 2 years. However, this absence must in fact be only temporary and those who have permanently departed may not necessarily be able to rely on the 2 year rule.

Further, prior to 1 July 2007 it was possible to return to Australia for a period of more than 28 days in order to ‘refresh’ the 2 year period. However, this possibility has been omitted from the re-write of the residency laws and, on a strict interpretation, this is no longer possible.

The second residency test broadly requires that where the fund has active members (broadly, a member who contributes, or has contributions made on their behalf), at least 50% of either:

must be attributable to interests held by resident active members. To put this in context, in the case of Mum and Dad who are both overseas and non-resident members (assuming the first CMC test could be satisfied), a single contribution by either of them will cause the fund to lose its Australian status.

What penalties apply to non-Australian funds?

When a fund ceases to be an Australian fund, its assessable income (in the year following the year when it was an Australian fund) essentially includes an amount equal to the market value of the fund’s total assets, less any crystallised undeducted contributions made between 30 June 1983 and 30 June 2007 and any non-concessional contributions made from 1 July 2007. This amount is taxed at the highest marginal rate (currently 45%).

However, many are unaware of the ‘double sting’ incurred if a fund later regains its Australian status. Broadly, a similar amount (assets less contributions) is included in the fund’s assessable income (in the year following the year when it was a non-Australian fund). If the fund regains its Australian status and also becomes a complying fund, this will be taxed at 15%. However, if it becomes Australian but continues to be non-complying, this amount will be taxed at 45%.

Furthermore, for every year that the fund remains a non-Australian fund, its assessable income is taxed at 45% (as opposed to the concessional 15% rate for complying funds).

The penalties are summarised in the diagram below: 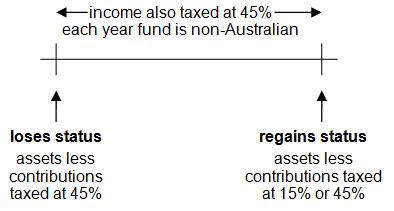 The above penalties are also subject to the General Interest Charge, which has averaged 12-13% p.a. in recent years. Given that years may pass by, the accumulated interest can be significant.

However, appropriate prior planning may readily overcome these penalties.

How can SMSF trustees plan for overseas travel?

Trustees should consider whether they roll-over from their SMSF to a public offer fund if they take an extended absence from Australia. A public offer fund would allow non-resident members to continue making contributions.

However, the appointment of a resident legal personal representative in place of the non-resident trustees (or directors of the corporate trustee) is one means of meeting the CMC test (provided contributions have ceased) and this strategy has been supported by the ATO. However, this requires documentation (enduring powers of attorney, documents to remove the departing trustees, etc) to be carefully implemented.

The key is to undertake planning before departure. DBA can assist trustees and advisers to explore the options available for a planned departure overseas.

Auditors and SMSF trust deeds: What the ATO say

Recent material from the ATO highlights the importance of SMSF trust deeds being kept up-to-date.

‘Auditing a self managed super fund’ (NAT 16308 published in August 2007) reminds auditors that they should be asking the following deed-related questions:

Do all payments made comply with the trust deed?

Are all pensions paid in accordance with the trust deed? Remember that the new account-based pension and transition to retirement income stream were only introduced a number of months ago. Many older deeds do not allow for payment of these.

Has the trust deed been examined to ensure that the fund has been established and maintained solely for providing retirement benefits to members or to their dependants in the case of a member’s death before retirement?

The publication also reminds auditors that a copy of the trust deed should be included in their work files.

DBA can assist in making sure that deeds are up-to- date and compliant. We are pleased to review deeds to determine whether they have appropriate powers as well as drafting deeds of variation where appropriate.

Also, a new online solution — the Annual Update Service — has recently been introduced for keeping SMSF governing rules up-to-date on an ongoing basis.

A good deed is the backbone of any strategy.

DBA News contains general information only and is no substitute for expert advice. Further, DBA is not licensed under the Corporations Act 2001 (Cth) to give financial product advice. We therefore disclaim all liability howsoever arising from reliance on any information herein unless you are a client of DBA that has specifically requested our advice.