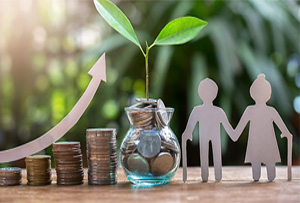 Over 200 years ago, on 7 March 1795, English newspaper The Hull Advertiser announced that ‘[t]he licence to wear hair powder will be commuted for a tax on powder itself.’

Naturally, the new laws passed on Monday do not affect hair powder. However, they do affect commutations! Although this is hardly a case of history repeating itself, these new laws, like the commutation of the licence to wear hair powder in 1795, are definitely newsworthy!

Firstly, what the new pension laws do NOT cover

The 2021-22 Budget (ie the Budget announced in May 2021) said that it would give older Australians the choice to move out of legacy retirement products. It announced that a two-year period will be provided for exiting market-linked, life-expectancy and lifetime pension and annuity products. It suggested that two-year period would commence on 1 July 2022. It said that any commuted reserves will not be counted towards an individual’s concessional contribution cap and will not trigger excess contributions. Instead, they will be taxed as an assessable contribution of the fund (with a 15 per cent tax rate), recognising the prior concessional tax treatment received when the reserve was accumulated and held to pay a pension.

Industry was excited by this announcement. However, the announcement is still just that: an announcement. It is yet to be legislated. The new laws that have been made do not relate to this Budget announcement. They are a different kettle of fish.

What the new pension laws DO cover

In mid-2017 the transfer balance cap and related legislation commenced using the term ‘capped defined benefit income stream’ (CDBIS) to refer to certain legacy pension and annuity products. Relevantly for SMSFs, a CDBIS can be any of the following pensions that was also in the ‘retirement phase just before 1 July 2017’ (emphasis added):

Naturally, pensions that are CDBISs have severe restrictions on when they can be commuted.

Many CDBISs resulted in the pensioner receiving a credit to their transfer balance accounts being in excess of the general transfer balance cap (originally $1.6 million) without a modification to the transfer balance rules. Because these CDBIS have severe restrictions on when they can be commuted, there was little a pensioner could do regarding the excess. Accordingly, a special exception for CDBISs and the transfer balance credit was included in the legislation. As a result, CDBISs by themselves, generally do not result in an excess transfer balance (ie, assuming there are no other non-CDBIS retirement phase products that could cause an excess).

However, a problem was still left. Namely, note that, as alluded to above, in order to be a CDBIS a pension must have been, among other things, in ‘retirement phase just before 1 July 2017’. If, for example, a CDBIS was commuted on or after 1 July 2017 and a new market linked pension was commenced with the resulting lump sum, the new market linked pension would not be a CDBIS (ie, because it was not in ‘retirement phase just before 1 July 2017’).

In short, there was no clear solution to this issue, and taxpayers who had restructured their large CDBIS pensions on or after 1 July 2017 were potentially faced with a perpetual excess transfer balance tax issue to manage.

The new pension laws address the problem described above by enabling the pensioner to undertake commutations to resolve the excess transfer balance. Critically, as part of this, a market linked pension that would usually be a CDBIS but was not in existence just before 1 July 2017 can now be commuted in order to comply with commutation authorities issued by the Commissioner (ie, to resolve excess transfer balance amounts).

Naturally, there are many more detailed mechanisms in the new laws, and potentially some exciting opportunities that may be available under the new laws, which we don’t consider in this article. However, those for whom CDBIS restructures are relevant should:

Facebook0
Twitter0
Google+0
LinkedIn0
Exiting certain legacy pensions — new strategic opportunity!
What to watch out for when an SMSF trustee is deregistered